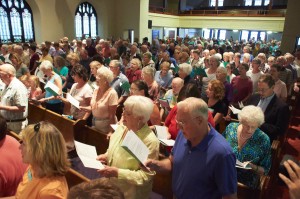 For many years State College residents came together for a weekly “community sing” each week during the summer, under the direction of Frank Gullo, the director of Penn State’s Glee Club, and Hummel Fishburn, the director of The Blue Band. This fun tradition disappeared in the 1970’s, it now has a new life, named in memory of Pat Farrell, a former Arts Festival board president. The enduring popularity of the event is proof there are lots of  people who aren’t in the church choir, or regulars at a karaoke night who enjoy singing.

Young and old, those who can sing, and especially those who can’t carry a tune in a bucket, are invited to join Russell Bloom, Erik Clayton, and Leah Mueller as the community comes together to make some joyful noise.

Russell is the director of music at St. Paul’s United Methodist Church in State College, where he conducts the two choirs and coordinates a part-time staff of eight musicians.  Erik Clayton was appointed as director of choirs at State College Area High School in 2015. He previously served in a similar position at Central Dauphin High School.  Leah Mueller is a music teacher in the State College Area School District. She studied music education at Penn State and earned a graduate degree at the Royal Central School of Speech and Drama, University of London.

It will be a fun evening of traditional songs, folk melodies, camp songs, and perhaps a Broadway number or two.

A Festival button is required to attend this performance. Buy one here.