As part of the annual Sidewalk Sale and Exhibition’s jury process, artists from across the United States and several foreign countries will submit digital images of their work to be juried by January 20. In February, a panel reviews the images using the Zapplication remote jury process and the artists receiving the highest scores are accepted into the Sidewalk Sale and Exhibition. 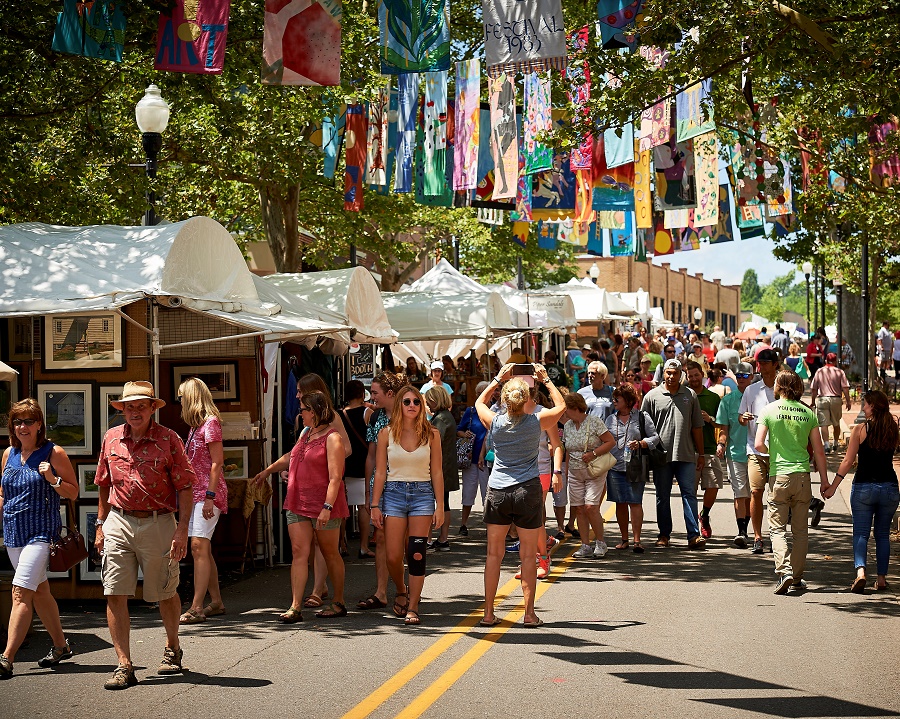 Our jurors visit each exhibitor during the Festival as part of the jury process and subsequently award over $17,500 in prize money. These award winners are announced at the awards ceremony at 9:00 a.m. on Saturday during the Festival, at the Allen Street Stage. Here are this year’s jurors:

Metalsmith Holland Houdek earned degrees at the University of Wisconsin-Stout and at Syracuse University. She is currently an assistant professor and art gallery director at Nazareth College in Rochester, New York. Holland is the recipient of numerous awards and was a finalist for the inaugural Burke Prize at MAD. Her work has been exhibited at the Museum of Modern Arts and Design (MAD) in New York, the Fuller Craft Museum, and many other museums and galleries throughout the world.

Ceramic artist Adam Ledford is an alum of the Tyler School of Art. He’s been an artist-in-residence at the Archie Bray Foundation, the Watershed Center for Ceramic Arts in New Castle, Maine and Guldagergaard International Ceramic Center in Skælskør, Denmark and has exhibited nationally and internationally. He also teaches in many different communities, including working with at risk urban youth in the Philadelphia Juvenile Justice System and teaching at the Philadelphia Museum of Art to adults who are blind.

Lauren Nye is Director of Exhibitions at the Susquehanna Art Museum in Harrisburg, Pennsylvania. In her freelance work, Nye collaborates with collectors, artists, and corporations to bring creative projects to life. She has curated exhibitions at both commercial and non-profit venues for over a decade and has assisted in sculptural installations nationally and internationally.

Robert Villamagna is a mixed media artist. He creates work in his West Virginia studio using repurposed lithographed metals, found objects, and vintage photographs. A retired faculty member at West Liberty University in Wheeling, WV, Villamagna has an extensive exhibition record. His artwork has been exhibited at the Carnegie Museum of Art, Warhol Museum, Mattress Factory, Butler Museum of American Art, and other venues. In 2016 he was named the West Virginia Artist of the Year.

See the artists in the 2022 Sidewalk Sale and Exhibition

We have over 200 artists in almost 20 categories, something for every taste and budget!

Get a Festival poster and buy Festival wristbands, t-shirts and other merchandise at the corner of College and Allen – or visit our online store.